What Happened at the Wisconsin Green Party Fall Gathering 2020

Synopsis: Wisconsin Green Party Co-Chair Dave Schwab publicly slandered Thistle Pettersen and abused his power to influence an internal election of Party officers at the 2020 Fall Gathering. In this post you will get a play-by-play of what happened that day regarding Mr. Schwab's proposed bylaws changes that would harm the rights and protections of girls and women, in addition to being able to view the moments at the day long gathering in which Mr. Schwab defamed Ms. Pettersen.

On November 14th, I attended the Wisconsin Green Party (WIGP) Fall Gathering along with about 30 others in my State.

Dave Schwab, WIGP Co-Chair, facilitated the meeting and was also running for the position of National Delegate in the internal election presented that day.

Mr. Schwab was also responsible for introducing new language for discussion at the meeting of WIGP bylaws.

Kerri Bruss, another WIGP member, and I, challenged Mr. Schwab’s proposed bylaws changes and his interference in the internal election of party officers. 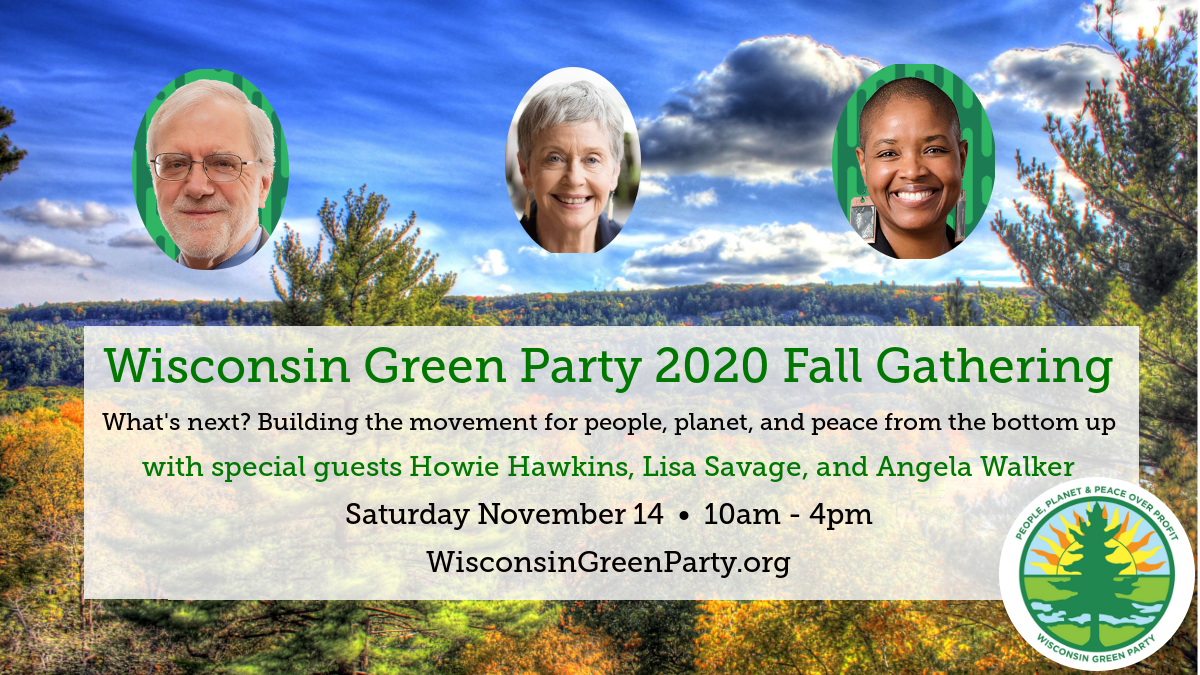 Both proposals to change the bylaws were presented by Chairman Schwab, the first being about removal of GP members if “gross misconduct or violation of the adopted Key Values, Platform, or code of conduct adopted by the Party...” is found to be true of said individual “...by decision of the Membership or the Coordinating Council.”

Kerri and I challenged this new bylaw as we know very well that when terms like “gross misconduct” are used to describe feminists, it means we are being misrepresented and excluded from political participation because of our feminist views.

The second bylaws language change proposal discussed at the Fall Gathering also gave Kerri and me the opportunity to raise our feminist concerns about the proposed changes.

Discrimination on the basis of sex, race, age, religion, economic status, sexual orientation, ethnic identity, national origin, handicap, parenthood or color in the conduct of the affairs of the Wisconsin Green Party is prohibited.

As soon as Kerri and I saw the term “gender identity and expression” we knew we needed to raise our objections as we know that the concept of “gender identity and expression” is harmful to the existing sex-based rights of girls and women as it enshrines into policy the idea that one can literally BE the opposite sex. This is not only a falsehood with regard to physical reality, but if men can “identity” as women, the door is opened for men to be admitted as women into rape crisis shelters, women’s sport, prison accommodations for women, bathrooms, locker rooms and other private spaces meant for women only.

We did not go after the term “gender identity and expression” right away in our critiques of the new language but rather I asked why “parenthood” was changed to “family status” highlighting that it is women who get pregnant and are traditionally discriminated against based on that status and the term “parenthood” more closely describes the state of pregnancy than “family status.” Mr. Schwab brought up that the term “family status” includes other statuses besides just “parenthood” like being a child, to which I responded that children under a certain age probably are not permitted to be Green Party members. Conversation ensued in which Co-Chair Barbara Dahlgren said that the official rule of the WIGP is that one can become a member at age 16. Others chimed in to say that they did not think changing the word “parenthood” to “family status” mattered.

Soon after the discussion of “parenthood” versus “family status”, Kerri brought up the following issue in the chat:

“Q: What is the significance of the order in which these protected characteristics are listed? I note that ‘sex’ moved from #1 to #13 which for me as a woman is concerning. Women are an oppressed sex class and as a party w/ the key value of feminism, it feels wrong to me and like ‘sex’ is nothing more than an afterthought.”

Of note, Tomas Ward, WIGP member and newly elected representative for Congressional District 6, responded verbally to Kerri’s concern by saying that he too was concerned that the category of “sex” was moved from place #1 to place #13. In that same verbal statement, he proposed a “friendly amendment” to keep the word “parenthood” in the new language as well, for the reasons stated above.

The discussion came to a close quickly without Kerri or me bringing up the term “gender identity and expression,” the hot button term that gets women called “TERFs” and “bigots” if we question it. Of note, Kerri did manage to write into the Zoom chat feature the following that was never addressed:

“What does ‘gender identity’ mean? Can you define the term w/ out some circular definition, or a reliance on sex-role stereotypes which would constitute discrimination on the basis of sex?”

The meeting moved along and it came time for the candidates running in the internal election to give our pitches and to allow for a brief discussion period before speaker Cheri Honkala took the floor.

It was at this time that Chairman Schwab called on himself to start the discussion of candidates and began to defame me and encourage everyone to not vote for me in the election.

To see exactly what happened at the Fall Gathering of the Wisconsin Green Party, check out the video above produced by April Neault of the WLRN media collective in which she pulls the key moments together to clearly show how Co-Chair Dave Schwab abused his power as a GP officer in order to influence the outcome of an internal election.

It should come as no surprise that the election results did not include me winning a seat for any of the four positions I ran for and to date, nobody outside of the election committee has been provided the raw data to examine. Of note, Ms. Bruss made the following inquiries on December 2nd, “When might the raw data from the election be released? And when might the report from the committee that tabulated those ballots be accessible to members?” To date there has been no response.